The Fibonacci retracement method uses a set of key numbers called Fibonacci ratios to identify the support and resistance levels of an asset/stock/cryptocurrency.

What Is a Fibonacci Retracement Level?

Horizontal lines are drawn that represent Fibonacci retracement levels that represent support and resistance levels. Each level corresponds to a certain ratio or percentage. It illustrates how far the price has tried to reverse from a previous movement. The prior trend is anticipated to continue in the same way. Yet, before that occurs, the asset's price normally retraces to one of the above-mentioned ratios.

How to Use Fibonnaci Retracement?

The Fibonacci sequence is a set of numbers that includes a certain pattern like, 0, 1, 1, 2, 3, 5, 8, 13, 21, 34, 55, 89, 144, etc. Every number in this sequence is the sum of its previous two numbers and every number is 1.618 times greater than the previous number. The Fibonacci ratios are calculated simply by dividing the numbers in the Fibonacci sequence. For example, the ratio of 61.8% is calculated by dividing 21 by 34 or dividing 55 by 89. The same goes for every other Fibonacci ratio as well.

Fibonacci ratios identify the price momentum of an asset in the financial markets. Technical traders use them to draw support lines, visualize resistance levels, safeguard their capital by putting stop-losses at key Fib levels and set take-profit targets.

How to Draw Fibonacci Retracement? 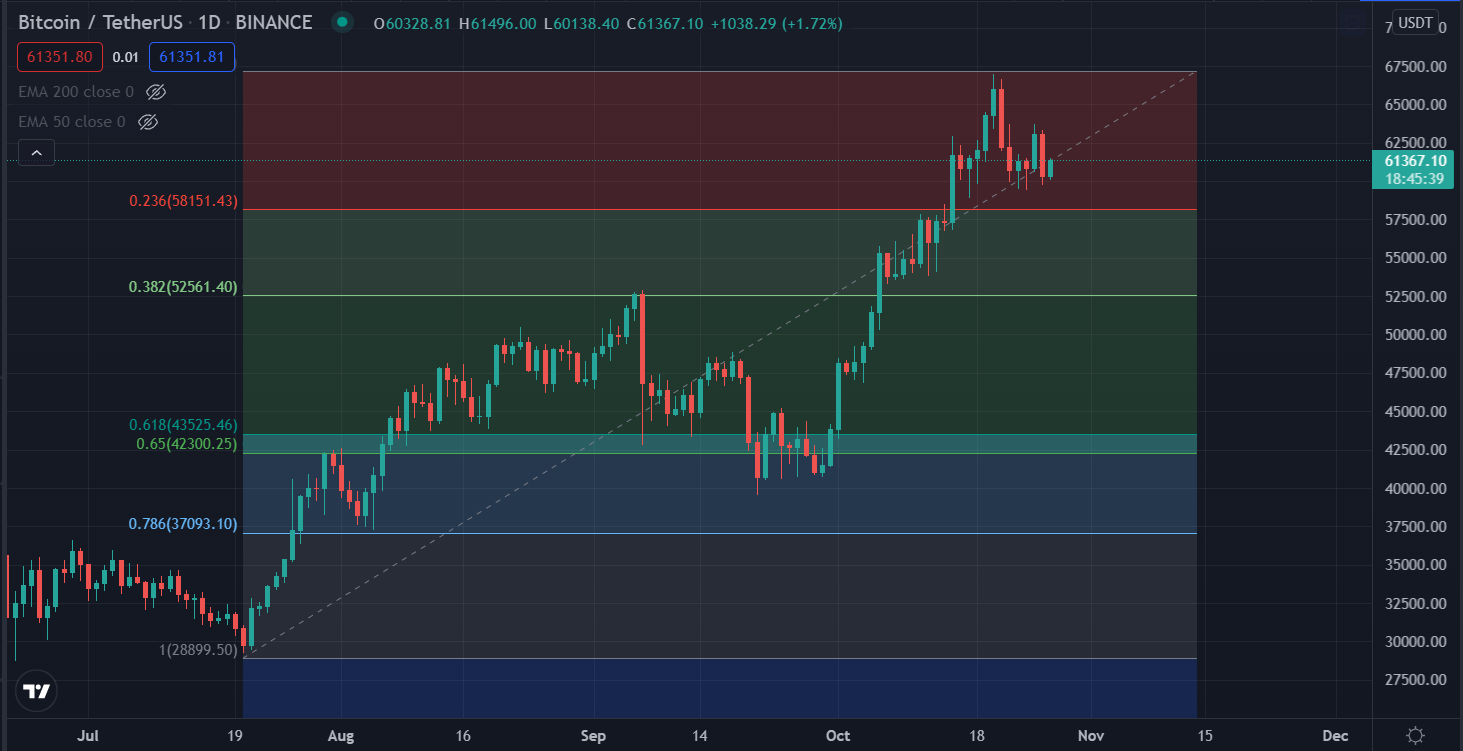 In the chart above, you can see that the Fibonacci retracement is drawn from the lowest point on the 1-day chart of Bitcoin (BTC) to its highest point. The Fibonacci ratios can be seen on the left-hand side along with support lines. Notice how BTC broke the 0.65 ratios, also called the 'golden pocket', and sprung up to the 0.382 level. When it broke that level, 0.382 became its support and it consolidated for a few days before breaking the 0.236 lines on the Fibonacci retracement chart.

What Is the Best Setting for Fibonacci Ratios?

Like every other technical indicator, Fibonacci retracements also have some flaws and you should be aware of them before using this indicator to invest your capital in the financial markets. The first disadvantage is that this indicator isn't objective, which means that it works well only for some assets. For Fibonacci retracement to work in the market's favor, a significant amount of traders have to use the same Fib ratios, which will then reflect in the price momentum of the asset as well. Since there is no logical proof behind this technical indicator, using it solely makes it unreliable and it is advised to use other technical indicators like relative strength index (RSI), Moving Average Convergence Divergence (MACD), on-balance volume (OBV indicator), Aroon indicator, and the stochastic oscillator.